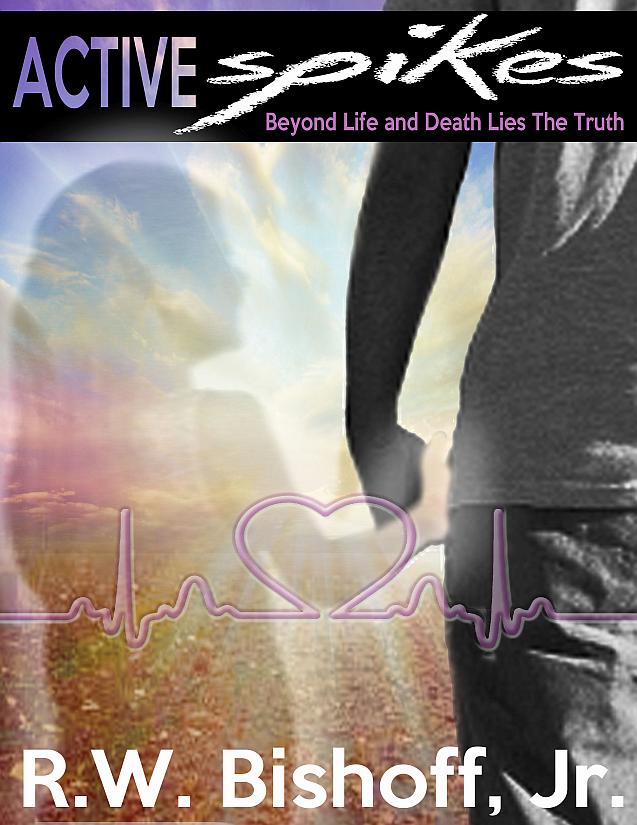 Excerpt from Active Spikes:  Beyond Life and Death Lies the Truth

My parent use to tell me that beneath our feet rested every moment that ever was, every life that ever roamed, every event that ever occurred. Our planet, a closed system that recycles every molecule and remembers-everything.

I use to think my parents were as freaky as they came.

Even now, I tread across this dirt and feel it give beneath my feet but not just to my weight, I feel it giving up secrets. Each blade of grass and it’s soft bed wavering with battles, emotions, thoughts, and blends of moments stretching as far back as time permitted. From primordial pools to whitewash fences, it’s all there and I feel it all.

Now, who is the freak.

Cemeteries hold particular fascination. Knowing that real bodies lie just out of sight, their memories stored and leaking into the surrounding dirt. Just as water always seeks it source, our minds, bodies, and souls seek its perpetual source as well. Spreading out from our last resting place and sharing all that we were with all that is. That which was the saber-tooth becomes that fog that ushered the glacier, the glacier given way to temperate all the while more moments just keep on coming. Piled upon pile upon pile.

Great, here I am washed in a thousand lifetimes and still unable to find my own way through the weeds and markers.

The death stones cast long shadows as the sun sets. Broken by the sheer number of other stones that seem to engulf the field. This was a very old place, so old that dates have been washed away by the seasons and names have become grooves, grass has become dense and bogs had begun to reclaim the soil. Of all places for me to end up as the sun goes down this was not the first choice nor the last but the energy that feeds through me is at its peak just as the sun winks out and dark is washed clear. Sarah told me it was here, a small timid voice that cried out in the night. I feel nothing. Step by step, marker to marker I have yet to feel that anchor. That pit of despair for the lost. Each body, mere form now swallowed whole by the hungry planet that learns from our winking out of existence.

Why did some not get taken? Why do some just linger? Energy is energy, life is life; isn’t it all the same? More importantly, why was I a tuning fork for the planet. Been better off working at the lab with mom and dad, but when science and metaphysics collide your usually left with a spitting contest. They were never that bad, especially growing up when it seem like I could pull more than weeds from the garden, or from the walls, the creek; oh, well-the point is made. Still, they gave me that stoic logic that keeps me grounded and the background to keep it all on an even keel.

About as even as it comes when you chases moments from the past. Spikes, I call them like active doorways between places, or times, or people. Mom, said I was four the first time I used that word because it felt like a spike driven through my foot and all the way to my brain. I’ve never really been able to pin down what they are but when moments collide, I have a spike. Nothing more than a name, no definitions, no understanding and apparently something uniquely my own. Others may hunt ghosts, man-are they off the mark, or yetis, or nessy while they chase illusions I get to see the truth and it is magnificent. Even if it defies explanation.

The ground is starting to tingle like it’s getting ready to let loose with a torrent of emotion. I see changes all around me in the coming darkness, shadows moving, colors; all energy. Still no spike. I keep moving about the headstone looking for the broken angel that Sarah has mentioned. For a clairvoyant, she could have been a little more precise. There are so many angels in this cemetery that you would think heaven had descended. All is peaceful, quiet, calm. What I expect from a cemetery.

“She missed the mark on this one.” I thought passing back to the image of Sarah this morning. “Tortured soul,” She said. “Lost and alone…” but I don’t see anything, feel anything. As I begin to climb a steep hill to some isolated stone, I felt a surge of energy course up my left leg. No broken angel just a toppled stone. Ingrid, is just faintly obvious in the elemental washed face. No turmoil, just no peace. I reached down and touched the ground, and felt a course of life beneath my fingers. No substance, just the remains.

“I give you back to the mother from whence you came,” I quietly whispered as my eyes closed and I saw the blue field of light dissipate in all directions behind my eyelids. I stood for a moment and looked out as the blue dimmed into the horizon remembering the day my grandmother was buried and I stood with the spike up my leg as she was buried. I could still make out her form but not her presence but I could feel her looking at me and felt that guttural roll that is a request for assistance. As if by instinct, my hand became a dissipater. A saturation point where all is equalized and was once a collection of energy becomes a part of the whole again.

Sometimes I wonder just how close to a working computer our planet is. Input and output, nothing is ever wasted, there is some command for creation and another for death, amazingly little oversight for the in-between parts. We all must play the parts.

Astonishing the power that comes with what I do. Amazing, Earth’s personal assistant. The catalyst that keeps the machinery running whenever there is a glitch in the system. Who said planets are perfect anyway? Sometimes things just go wrong. Dad always believed energy can neither be created or destroyed; just changed.

The field settles back to normal and I stare transfixed on the outline near the top of the hill. A shadow in the moonlight clings to a broken wing sticking from the ground. I moved closer, on the muddy slope seeing the faint rays of light rises and setting next to the stone. My ears begun to ring and I pressed my index finger into my temple to steady the onslaught and felt my lungs heaving against the weight of energy in front of me. Stumbling in the wet soil and slid hard against the tombstone and found myself face to face with a little girl.

“Hi…” I stammered not sure if I heard that or just felt it rumble in my head. “How are you.”

“I’m ok, how about you?” She smiled wide and playfully.

“Tell me, how is it you can talked to me?” Realizing that words require air, lungs, and a voice box.

“But…well, that’s not the way it works,” I jolted trying to grab a little sense from this meeting.

“No one, like you, has ever actually said anything to me. I just feel what they are thinking. People like you, well, can’t speak.”

“Well,” she tugged on her dress to iron the wrinkles out, “Maybe I’m not like others.”

She giggled and stood up and signaled me to do the same. “Want to play…”

This was a head scratcher I thought to myself. Did I fall and knock myself out and now I dreaming.

“Come on,” she said, “over here.” I followed her around the headstones and down towards a brook where there stood a tree and the ancient remains of a swing.

“I, I can’t, there’s nothing to push.” Still coming to grips with an fully functional disembodied female.

“You are funny.” She said sliding onto the old board. The ropes were worn and threaded and looked like they couldn’t support the weight of a snail let alone a girl but as she said it became, well, for lack of a better insight, new again.

“How…” I struggled to understand 25 years of incompatible information. “You’re not really here and I’m dreaming, right?”

I moved around behind here and in the moonlight felt a wind rush as she swung forward and back. I stood there waiting for something, not sure what, as I felt her swing just out of my reach. I stretched out my arm and felt as it recoiled as she back into it.

“WOW! That is incredibly impossible.” I laughed, feeling a solid form move beneath my hand. I am…amazed. What is your name?”

“Jenny,” she said the wind blowing her hair back as her voice trailed away from me on the swing.

“Do you know where you are,” I asked trying to put some of the pieces together. “I mean, where you come from.”

“Under the tree, in the swing, you silly.” she laughed.

I found a remarkable comfort in her presence. Almost like I had known her my entire life. She smelled like a meadow, she moved like the wind. I was a little beside myself but had resigned to just letting things go on as it was.

“But why are you here, now, it’s dark…I found you in a cemetery for heaven’s sake and not a soul around.” I tried not to give too much information, didn’t know what to expect if she knew the truth.

The riddle continues, I thought to myself. She’s not given about as much as I’m not. I moved around to face here and still just as solid as ever she continued to swing.

“I just don’t understand,” I told her as I knelt before her.

“What’s to understand? Can’t you just play with me?”

“Yes…no…I mean I was sent here to help you.”

“I’m okay, maybe you need the help.” She giggled.

The spike was still drilling into my head so this was no dream but I couldn’t make headway in putting all this together.

“Tell me, something,” she said jumping from the swing and sitting before me, “what is your name?”

“I’m Daniel, Jenny, it is very wonderful to me you.” I stuck my hand out to shake hers and she obliged and I felt warmth from her textured skin. I was getting more confused by the second.

She had the boundless energy of a ten year old making it difficult to keep up with her. Apparently, a tomboy in a past life she had no fear of trees, frogs, or mud and took great pleasure in the things about her.

“What is your mom’s name,” I asked as she jumped from the tree and landed silently in a pile of leaves.

“Wilma, and my dad is Sam.” She said without missing a beat, leaping out of the grass and running around the tree.

“Where are they,” I asked still maintaining the illusion.

Confusion gave way to concern, was this a real girl, was I bleeding on that headstone, or had some other event altered my reality? I was dumbfounded.